At the beach house you can pretty much do what you want because…well…it’s a beach house.  A few years ago I traced the shadow of the sun coming though the window and making shadow play with the stuff on the sill and, eventually, I painted it blue (the yellow stuff I painted on in 1992 when we got the house–the dots are my finger prints.) 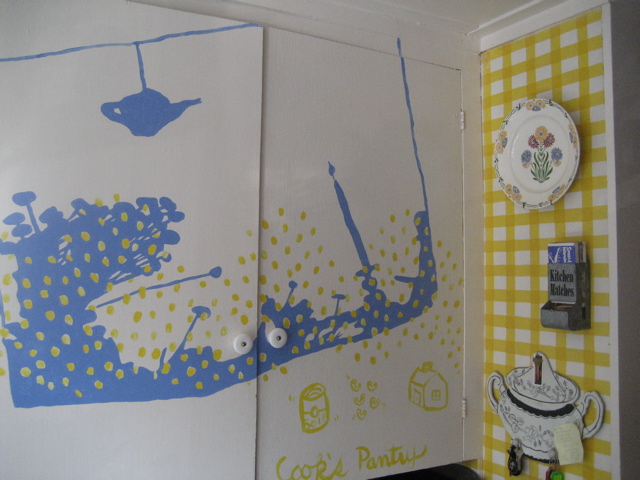 Last year I traced another shadow onto the left-hand cupboard.  This weekend was 16 years since the day we moved in to the beach house on which momentous occasion I painted this ugly, but symbolic, “plate” on the wall.  (September 20th is also our wedding anniversary–9-20-69.)

I decided this past Saturday, September 20th, was the perfect symbolic moment to continue painting on the cupboard:

and then ANOTHER shadow appeared, and another and well, things got a little out of hand:

Oops.  Think I’m going to have to paint out the blue lines above the cupboard doors.  What do you guys think??