Here is an iconic moment in time for Salem, and for our neighborhood.

On April 25, 1935 (85 years ago from this writing) a raging fire consumed the roof and copper dome of this, Oregon’s second State Capitol building built in 1874.  It was designed by the Portland firm of architects Justus F. Krumbein and W.G. Gilbert and was modeled on the US Capitol dome by architect Thomas U. Walter (added to the US Capitol in 1859-1863). (For an excellent discussion of the building read historian Elisabeth Walton Potter’s essay in the Oregon Encyclopedia) 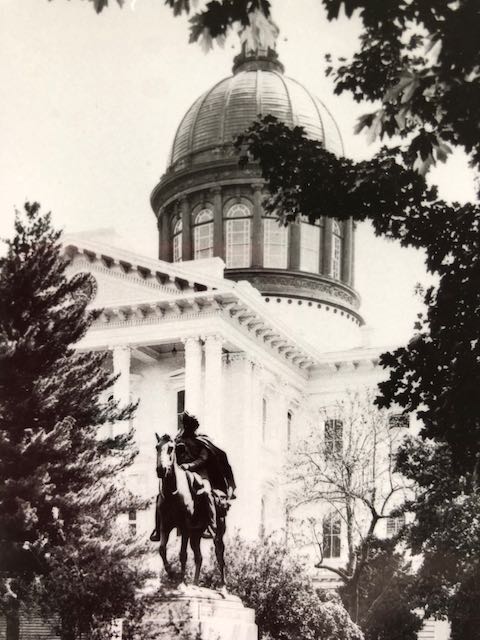 The building was built at the east end of block 84 in William Willson’s town plat of 1846.  The building itself faced west, into Willson Park, with present-day Waverly Street behind it.

The day after the fire, our neighborhood resident Lewis Griffith took these photos… 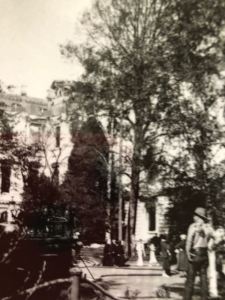 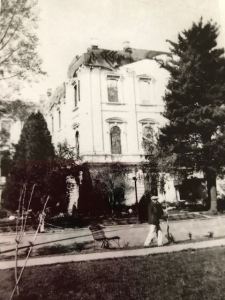 Many volunteers helped fight the fire including 12 year old Mark Hatfield, later governor and US Senator.  Students from Willamette University, across State Street also helped fight the fire and one student was killed.  The fire started in the basement and was carried by the hollow interior columns up to the dome.  When the building was razed after the fire some of the broken exterior stone columns migrated and these ended up in Mill Creek (now relocated to Willson Park)

After the fire and a discussion of relocating the State Capitol to the un-built Candalaria hills, it was decided to rebuild on block 84 but to reorient the building and “reconfigure” the neighborhood (and that neighborhood was entirely razed for the Capitol Mall as it exists today).  The new “modern” Capitol building was dedicated in 1938.  This aerial of the cornerstone ceremony shows the mature neighborhood that existed across the street. 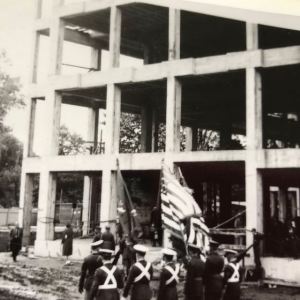 By 1950 all the beautiful old houses were gone or moved.  The core central residential neighborhood of Salem was gone.  What was left was the eastern extension of that neighborhood which today is the Court Chemeketa Residential Historic District, on the National Register of Historic Places since 1987.

And that brings us back to Lewis Griffith who was a state lands clerk, and who married Ila Spaulding.  Ila was the daughter of pioneer lumberman Charles K. Spaulding, and Spaulding built this house for his family in 1914 across Court Street from the Oregon Capitol building (with the B.C.Miles house to the right).

(the Miles house at the bottom, then the Spaulding House, the Duniway House and the Patton House) 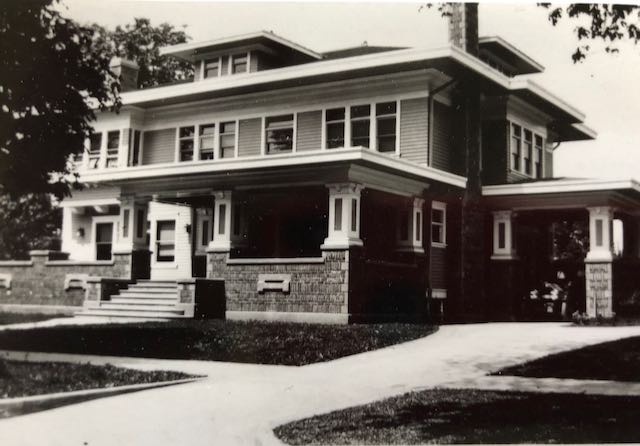 And here are the Spauldings on their front “lanai”…Ila is standing on the far right next to her parents (the couple on the left are Dr. and Mrs. Carleton Smith) with the Duniway house behind them (the Duniway House has been moved twice and is currently on State Street as low-income housing). 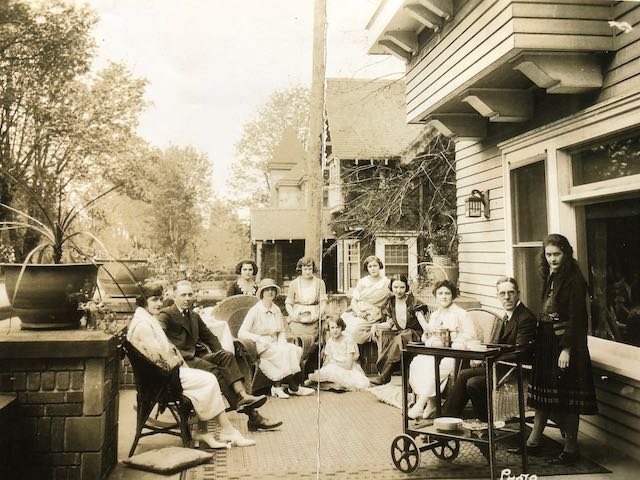 While the Spauldings were building their big house on Court Street in 1914, guess where they lived…they lived in OUR house!  Here’s Mrs. Spaulding standing in what would later become our driveway.. 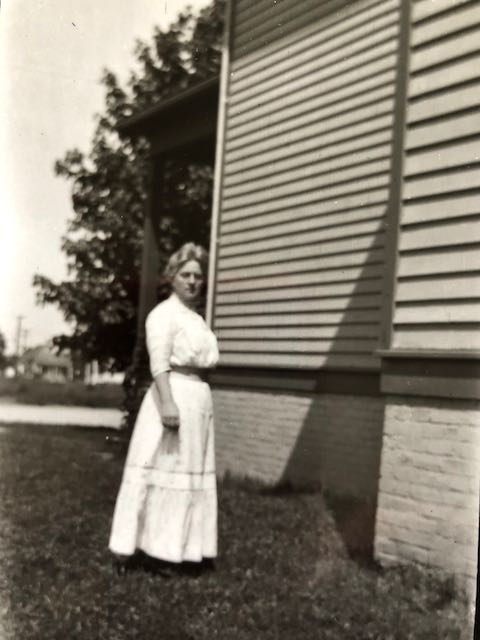 and Ila out front (we’ve taken the landscaping up a notch though…and the house to the left of Ila, the Ballou-West House of 1912, is still a viable part of the neighborhood).

Up next, views from the top of the old State Capitol Building.

All of these Griffith and Spaulding photos were courtesy of our much loved late neighbor John S. Griffith.  John was born and died in the Court Street house that Charles Spaulding gave to his daughter Ila when she married Lewis Griffith.  A story for another day.