I ran into Sharon in Lifesource yesterday and she said she always likes recipes on the blog, so I thought I share what we had for dinner last night…a shaved Brussels Sprouts salad…YUM.  I stole the recipe from Caffe Mingo in Portland and adapted it to our fridge and dietary needs…and I “mused” on sprouts a little as I cooked.  We spent the year in England in 1979-80 and got truly addicted to Brussels sprouts  (…good thing, as it was the only green vegetable available…) and then about March, they disappeared.  The season was over.  Of course here we can get them ALL the time, but I think the season is drawing to a close, so let’s eat some sprouts!

I’ll give you the whole recipe first, and then the visuals:

some craisins (raisins made out of cranberries)

The salad calls for “shaved” sprouts using a mandolin, but for safety-sake I don’t own one of those (I wouldn’t want to jeopardize my ukulele career, after all, by removing a finger tip…).  Here’s how I proceeded:

Cook the sprouts about 3-4 minutes until cooked but still firm and crunchy, drain and run in cold water…add some ice

slice as thinly as you can (put on cutting board, start at “top” and slice down to stem end…

slice pear and combine with sprouts, craisins to taste, (and bacon if you have it and want it) and dressing… 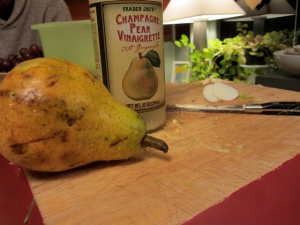 serve on a bed of small lettuce and put shaved parmesan on top…VOILA!  Yummy 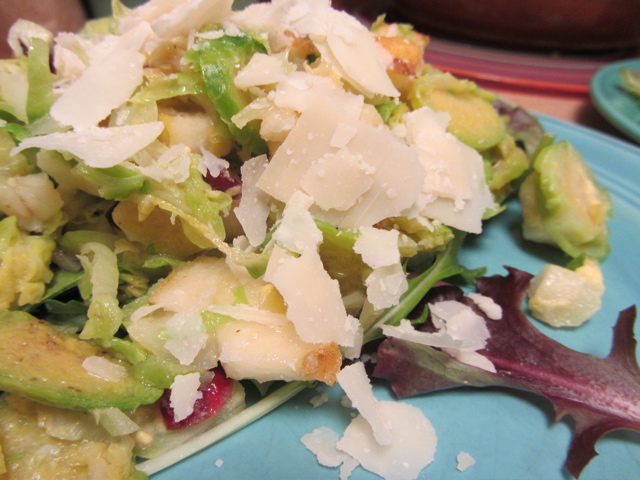